Kuskitannee 168 will be releasing their centennial flap and CSP at the lodge banquet on Saturday, January 17.  The design features the full centennial logo, as well as the centennial theme, “Centuries of Service.”

The 168 Executive Committee has also recently approved designs for a Conclave flap and a NOAC set.  More information will be posted on these flaps, as well as other potential new issues, later in 2015. 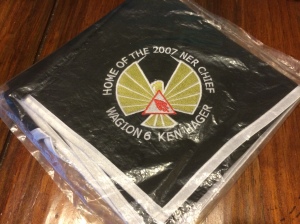 Collecting New York State OA, one patch at a time.